Covid-19 Update: At Tilem & Associates our lawyers are committed to protecting your rights, serving our clients and keeping you safe.
New York Trial Attorneys
Personalized Solutions. Aggressive Representation.
Contact Us Now For a Free Consultation
Home
Articles
Additional Articles for 2015
Are Rifles and Handguns Treated the Same under New York Law?

Are Rifles and Handguns Treated the Same under New York Law? 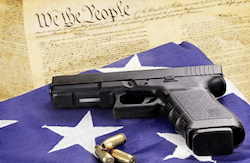 A lot of clients come to me and ask me about the difference under New York law about the difference between rifles, shotguns, and handguns. The truth is that there is a substantial difference. The definition of firearms in New York specifically excludes rifles and shotguns from the definition. Rifles and shotguns are in a whole different category than firearms, which are handguns. Sawed-off shotguns, which are shotguns with a barrel with less than 18 inches, or sawed-off rifles with a barrel of less than 16 inches, are firearms under the laws of the state of New York, but typical rifles and shotguns of average length that have not been modified are not considered firearms in New York state. As a result, different laws apply.

The laws are very complicated here in New York with the possession of both rifles and shotguns, which very often can be bought over the counter at sporting good shops and the possession of handguns. If you’re not sure whether or not it’s legal for you to possess a rifle or shotgun or for you to possess a handgun, it’s very important for you to speak to an attorney who’s familiar with this area. The laws are very convoluted and very complex, and the average citizen might have trouble navigating them.