Covid-19 Update: At Tilem & Associates our lawyers are committed to protecting your rights, serving our clients and keeping you safe.
New York Trial Attorneys
Personalized Solutions. Aggressive Representation.
Contact Us Now For a Free Consultation
Home
Articles
Additional Articles for 2015
Can I be Charged with a Crime if I Carry a Knife?

Can I be Charged with a Crime if I Carry a Knife? 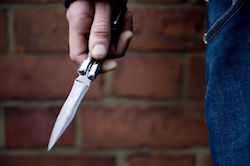 Possession of a gravity knife is a crime, it’s a misdemeanor, punishable by up to one year in jail. Generally, possession of a standard knife other than a gravity knife or a switchblade is not a crime. New York City has specific rules about knives over four inches and knives in plain view, and one has to be very careful if they’re going to possess a knife in New York City. Before carrying around a knife, whether for work or for some other reason, it’s important to understand the laws in your particular area, particularly in Westchester County or New York City. One might consult with an attorney before making a decision to carry a knife with them.